November 14th, 2014 is National Philanthropy Day here in Canada, and the Honourable Kerry-Lynne D. Findlay, P.C., Q.C., M.P., Minister of National Revenue, was in Vancouver to applaud those Canadians who donate to charities and to remind Canadians to take advantage of the tax credits available for eligible charitable donations.

This is in addition to the provincial credits available. 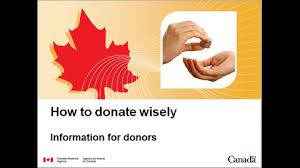 Those who have donated before can still be eligible for the charitable donation tax credit, a non-refundable tax credit which allows taxpayers to claim eligible amounts of gifts to a limit of 75% of their net income.

For a quick estimate of your charitable tax credit for the current tax year, try the charitable donation tax credit calculator, which can be found here.

Minister Findlay also reminded Canadians that only Canadian registered charities and other qualified donees can issue official donation tax receipts.  This is extremely important because if you make a donation to a charity which is not eligible to issue donation tax receipts but they provide one anyways, the CRA will re-assess you for that donation deduction with penalties and interest.  A little due diligence up front goes a very long way.

If it seems too good to be true, it should give you reason for concern…

To find out if an organization is registered, go to the Canada Revenue Agency’s (CRA) website and search their complete list of registered charities in their Charities Listings.

For more information about donating, such as how to calculate and claim the charitable tax credit, go to the CRA’s site for making donations, which is here.

Welcome to inTAXicating. inTAXicating has been published since 2008 to provide clarity around Canadian taxation issues, primarily related to the Canada Revenue Agency. As the primary author, Warren Orlans, has over 20-year's experience in the taxation industry, 11 of them working for the Canada Revenue Agency (CRA), and 7-years working in the private sector Managing the tax departments for large financial institutions. If you have a collections, compliance or audit issue with the CRA, inTAXicating is the place you need to contact. inTAXicating works in strategic partnership with amazing accountants, tax lawyers, insolvency practitioners, mortgage brokers, debt counselling experts and much more. If you have a tax question, email it to info@intaxicating.ca or to intaxicatingtaxservices@gmail.com. View all posts by Warren Orlans

Would Love to Hear Your Thoughts Cancel reply