Are you a Canadian resident who also has an obligation to file in the US?  Before you send in your US taxes to meet the April 15th filing deadline, make sure to remember there is still one more tax slip on its way.

If you are set to receive a T3 for a Canadian trust, you have a little more time that your dual-filing counterparts.

T3 slips, otherwise known as the Statement of Trust Allocation and Designations (RL16 for Quebec residents), are being prepared and mailed – copies to the CRA – by the end of March.

A T3 slip reports how much income you received from investment in mutual funds in non-registered accounts, from business income trusts or income from an estate for a given tax year.

If you have not received your T3 tax slip – get in touch with the relevant financial administrator or trustee but make sure to file your income tax return by the deadline anyway to avoid late filing penalties.

You can find more information from the CRA website, here.

Are you chomping at the bit to get your refund?

Before you push forward and get that return in, make sure to check that you have received all the tax slips you should be getting?

If you forget a tax slip – T3, T5, T4, T4A, etc – the CRA does not accept the argument that you just “forgot it”, but rather they believe that you have willingly omitted the slip in order to reduce the amount of income that you are reporting, so you end up paying less taxes.

The penalty for missing slips can be quite steep.

Forget to include slips year over year and the penalty increases.

At inTAXicating, we encourage our clients to keep track of slips expected and slips received through a spreadsheet, or a program such as QuickBooks  based on the slips received in the previous year, and any transactions in the current year which will result in the generating of a tax slip.

In the inTAXicating Personal Tax Spreadsheet, we take tax slip tracking a little bit further by identifying which member of the family the slip belongs to, when it was received the previous year and which institution produced the slip.

Remember that slips produced by institutions are also sent to the Canada Revenue Agency (CRA) so they know what you should be filing before you do unless you keep track.

Then take this list, and staple it to a box or file folder which is kept in the house / place of business for all potential tax-related materials for the year.  At tax time, it’s an easy checklist to make sure all is in order and that when filing, everything is included.

If, however, you have forgotten to include a slip, the Canada Revenue Agency (CRA) will eventually use their copy of the slip notify and re-assess you if you have not had the time to amend your return.

If you don’t get to the CRA first, the next thing you know, you likely will have a balance owing and along with the penalty for missing the slip, the debt is accruing interest.  It can easily escalate from there!

A little organization will reduce the amount of penalties and interest paid to the CRA.  As the Tax Manager for Computershare Trust Company of Canada / Computershare Investor Services, I was responsible for the preparation, filing and submission of tax slips to the millions of investors Computershare kept track of, so I understand more than anyone the importance of getting slips out to the holders on time, and accurately, and then to the government on time and without penalty.

Here is a list of the slips you could receive and the date they have to be mailed to the holder and to the CRA.

RRSP – If you were one of the many who used the March 1st deadline to make your contribution for the previous year, then you would be receiving that slips beginning March 15th.  All other RRSP contributions which were made prior to the 60-day extended period saw their tax slips mailed beginning at the turn of the calendar.  They are T4RSP slips and RL2’s for residents of Quebec.

T4RIF / RL2 withdrawals from a RRIF, are mailed the 3rd week of February.

T5/RL3 for investment interest income coming from a mutual fund are mailed the 3rd week of February.

T3 / RL16 reporting dividend income from mutual funds are mailed by the 3rd week of February.

T4A / RL1 are issued for RESP withdrawals and are produced and mailed the first week in February.

NR4’s showing income for non-residents of Canada are mailed the 3rd week in February.

If during the year you received Employment Insurance (EI), Old Age Security (OAS) or Canada Pension Plan (CPP) payments, you can follow this 3-step process from the government website to make sure everything is in order and get your tax slips online directly from Service Canada.

inTAXicating Tax Services for all your tax needs and specializing in providing solutions to your tax problems.

This post is a brief look at estate filing rewuirements with the Canada Revenue Agency (CRA) and the role and requirements of an executor in Canada.

In Canada, there is no estate or succession tax, unless you consider the taxes owing to the CRA on the estate at death.  RC4111(E) for English is what I used to do my research on this area, which can be tricky if you have no experience dealing with Estates, or with the CRA; http://www.cra-arc.gc.ca/E/pub/tg/rc4111/rc4111-e.html.

Here is what makes it complicated… Your loved one dies and there is money left in the estate and by money, I’m referring to bank accounts, some investments and maybe an asset owned in the name of the deceased, like a car, or even a house.  Before you, or the person responsible (the executor) can begin removing things from the deceased’s name into someone else’s name – usually yours – they have to first go to the CRA and find out if the deceased owed any taxes.

Aside from information already on their systems, the CRA will know if there are taxes owing by the deceased based on what has already been filed.  But what about stuff not filed yet?  One way the CRA determines if there are any taxes owing is by having the executor complete the filing of all tax returns owing for the deceased within 60-90 days of their date of death.  Then, if there is no amount owing, the CRA provides a certificate called a clearance certificate which the executor can then present to banks, etc along with the death certificate in order to move funds and investments over to the surviving member.

If a clearance certificate is not received and funds are disbursed and the estate owes taxes, the CRA can then hold the executor liable for those funds!

The returns the CRA will be looking for include a T1 (individual tax return) for the decreased covering the period from January 1st of the year of death up to the date of death, reporting all income from employment and investments.  Report income earned after the date of death on a T3 Trust Income Tax and Information Return.  A T3 reports income from trusts for the estate (all the assets of the deceased make up the estate).

The capital gains (profit on any item bought) on their investments also have to be accounted for an added on this return.

If you file the final return late and there is a balance owing, the CRA will charge a late filing penalty (LFP).  They will also charge interest on both the balance owing and any penalty. The penalty is 5% of any balance owing, plus 1% of the balance owing for each full month that the return is late, to a maximum of 12 months – as of January 2012.  The LFP may be higher if the CRA has charged a LFP on a return for any of the three previous years.

In certain situations, the CRA may cancel the penalty and interest if you file the return late because of circumstances beyond your control.  If this happens, complete Form RC4288, Request for Taxpayer Relief, or include a letter with the return explaining why you filed the return late. For more information, go to Fairness and Taxpayer Bill of Rights or see IC07-1, Taxpayer Relief Provisions.

Here is the 2011 CRA guide for preparing returns for deceased people;

Often times with all the complexities that come with International taxation we sometimes lose sight of the basic questions that come our way in the taxation industry. 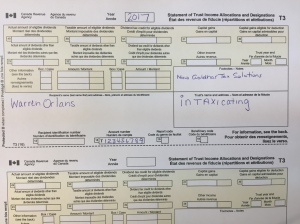 A T3 slip is a Canadian tax form that reports income from trusts for a tax year.

An individual taxpayer will include the amounts reported on the T3 on his personal tax return.

A corporation will include it as part of its investment income.

A trust (or trustee / intermediary / transfer agent, etc.) is required to provide the T3 slip to investors by the last day of February in the following year.

So what again is a T3 slip?

A T3 slip details the various types of income distributed from the trust for a taxation year.

Why would an individual get a T3 slip?

The most common reason is for distributions or dividend reinvestments in mutual funds or segregated funds.  However, if these funds are held in tax-deferred retirement (RRSP) or education accounts (RESP), no T3 will be generated.  The reason no slips is issued in those cases is because the income in those types of funds is reportable for tax purposes once they are withdrawn from the fund.

The trust is responsible for filing copies of all T3 slips along with a T3 Return to Canada Revenue Agency (CRA) by the end of February in the following year.

What kinds of income can trusts distribute?

Each is recorded on a separate line on the T3 slip.  Each type of income is treated differently for tax purposes and appears in a separate location on the taxpayer’s personal income tax return.  Capital gains may be offset by other capital losses in the year or from prior years.

A T3 is filed as part of a taxpayer’s T1 personal tax return.

When is a T3 required?

Regardless of the fiscal year-end of the trust, the T3 is generated and reported in the year the income is received.